Having the current world population living in urban areas in forty years time is a rather horrifying thought. However, that is it what is expected to happen in 2050 when the world population will hit the nine billion mark. A totally new world is gradually emerging in front of our eyes with totally new issues and with never experienced changes in urban social fabric.
The interconnectedness of political, social, security, public health, environmental, transport, energy, food and economic systems in this new urban context, interwoven with water, poses enormous challenges for urban planners even today. The key here is indeed water because it cuts through and connects all urban systems. Unless the water and sanitation systems are fixed, and fixed well, there is no way to achieve urban system sustainability.

Things are likely to get worse with the added uncertainties that are coming from increased climate variability. Urban natural disasters due to pluvial or fluvial flooding, particularly flash flooding in hilly areas coupled with landslides, are likely to increase. For sure, vulnerability will rise as more and more people migrate to urban areas. In particular, the poor will face increased vulnerability as they move during a disaster into unsuitable areas, such as flood plains or unstable hilly areas, subject to flooding and/or landslides. When they move back to their shanty towns after the disaster they basically have no other option but to re-create the vulnerability in the same place. Well thought out social policies and appropriate urban water management plans are among the best means of breaking out from this circular conundrum.

As elsewhere, water connects literally everything in the urban context as well. Whether we look at public health issues or urban riots due to not having access to suitable water supply and sanitation, the equation is still the same: it is all about water.

How are we to solve this equation? The graphics of the cover page of this book (also on the right of this page) aptly tells it all with the keywords there as tags. It is indeed about adaptive urban water management that flexibly reinvents itself as a function of changing needs. It is also about increasing the resilience of our systems as they became far too vulnerable to unexpected disturbances, whether urban terrorist attacks or sudden huge increases in water pricing leading to urban riots. In fact, it is all about resilience. It seems that our systems in many ways are over-optimized: they have lost the robustness to deal with the unexpected and the capability to absorb the shocks that follow.

This volume contains papers, written by young scientists from all over the world and from all sorts of disciplines that address these important water challenges of urbanization. The papers, all in an urban context, range from hydrology and climate studies to social inclusion and re-naturalization of the urban landscape. They present a great deal of innovative ideas. Some of them are, of course, debatable, but that is exactly the objective of this book: to start finding solutions to the emerging water challenges of urbanization. 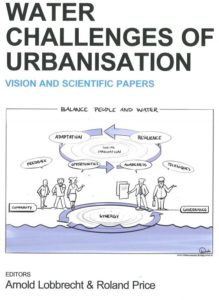