The GROW Observatory, a citizen science project, which has engaged green-fingered volunteers from across Europe to profile the continent’s ground conditions, was awarded the Land and Soil Management Award at the Forum for the Future of Agriculture’s (FFA) gala dinner in Brussels on Tuesday night 9 April 2019.

The project, which focusses on urban farming by citizens is a collaboration with 18 partner organisations located throughout Europe, including HydroLogic, and has received funding from the European Union’s Horizon 2020 research and innovation programme under grant agreement No 690199.

Free soil sensors have been distributed to citizen scientists across Europe for the project, forming a comprehensive network stretching from the olive groves of Greece to the orchards of Ireland. The sensors collect information about the soil in which they are placed, including moisture content, exposure to light and air temperature, which is relayed via Bluetooth to the citizen scientist’s smartphone and the GROW platform.

The data is being used to enhance understanding of soil conditions, allowing food producers to adapt their methods to climate change. The findings are also being utilised by the European Space Agency’s Sentinel-1 satellites, allowing scientists to predict extreme climate events such as floods, droughts and forest fires.

HydroLogic together with partners have developed the GROW platform where data collected can be accessed, visualized and combined with data from other sources such as satellite-observations and simulation model. Connections have been established between the HydroNET backbone ICT system and databases with soil-moisture sensor data and crowd-sourced metadata. HydroNET now provides API’s that allow scientists and external commercial partners to access GROW data for research purposes and commercial services using various standards among which GEOSS. HydroLogic has also been involved in service design, sensors and sensing, communication and business model activities.

The FFA judges said that the project addressed an issue that required “more attention from public and private stakeholders”, while also praising its potential for replication.

Professor Mel Woods (University of Dundee), GROW Observatory Academic Lead, said: “This is a huge honour and a testament to the hard work of University of Dundee staff and our partners across Europe. We have had fantastic support from our community champions and citizens scientists, and we still have people approaching us who want to get involved.”

Professor Woods continued: “The quality of the world’s soil, and soil moisture in particular, is something that many people may not think about, but is integral to our way of life and the issue of climate change. The technology that the GROW Observatory is using may be simple, but the work we are doing is crucial if we are to protect and enhance our land for generations to come.”

On collecting the award in Brussels on behalf of the GROW partners and community participants, Dr Drew Hemment (University of Edinburgh), GROW Observatory Principal Investigator, said: “Soil underpins life. Most of us walk on it every day, yet few of us understand it. There is an urgent need to preserve soils, and to increase resilience to a changing climate. The GROW Observatory connects soil to sky, and local communities to global challenges. GROW demonstrates the incredible things that can happen when people come together to make change.” 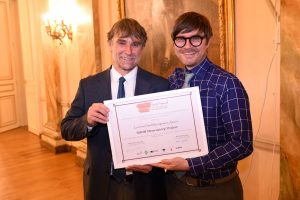 This project has received funding from the European Union’s Horizon 2020 Research and Innovation Programme under grant agreement No. 690199.