Grip op water Altena investigates: who has a green garden and why (not)?

In October 2018, the Dutch Citizen Observatory Grip op water Altena held a survey under the inhabitants of its focus region Altena.

The goal of the survey was to get insight into the reasons for having a grey or green garden and the incentives to create a greener garden. In total, 232 responses were received. The main results of the survey are presented in this blog.

Altena has experienced two extreme rainfall events in the past five years, with considerable damage to houses and farmland. To reduce the impact of future extreme rainfall events, more water storage areas are being created by the municipality and the water board. Citizens can contribute by increasing the water storage capacity of their gardens, for example with a rain barrel, a green roof or by reducing the paved area.

The results are based on the 216 survey responses obtained from citizens in Altena with a garden. We defined a grey garden as more than 50% paved and green as less than 50% paved. The majority of the respondents have a green garden, only 26% has less than 50% green space in their garden. Remarkably, this percentage is much higher for the younger generation, where less than half of the gardens is green. 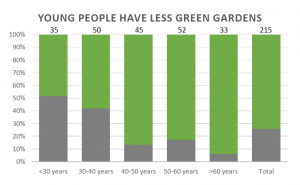 Citizens with a large house generally have greener gardens than people in smaller houses. A probable explanation would be that small houses have small gardens and people prefer a terrace above plants. This is the most given reason by respondents for little green in their gardens (48%), but there is no relation to the size of the house. Other important factors are lack of time or interest to maintain the garden and simply keeping the garden from the previous inhabitant. 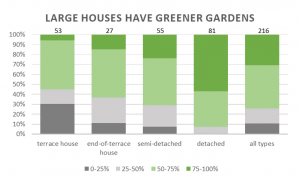 The most important incentive to green the garden would be subsidy, chosen by 46% of the respondents with a grey garden. They would also like to receive help with the design and maintenance of a green garden and examples from others.

Respondents with green gardens highly appreciate its beaut. In addition, they have a green garden to attract birds, insects and other animals. They have more often taken measures to retain rain water in their gardens (71% for green versus 41% for grey gardens).

The results of the garden survey show that already many respondents have a rainproof garden. Grip op water Altena will particularly need to target the younger generation to make them aware of the role that green gardens can play in reducing pluvial flooding.

About the project and the author:
Grip op water Altena is part of the project Ground Truth 2.0, a 3-year EC funded project that is setting up and validating six citizen observatories in real conditions, in four European and two African demonstration cases. Rianne Giesen is Project Leader at HydroLogic Research and works as demo case leader for Ground Truth 2.0.

This project has received funding from the European Union’s Horizon 2020 Research and Innovation Programme under grant agreement No. 689744.